BERIT NIELSEN – THE WOMAN BEHIND

An interior design dream with its own Instagram profile

It was not at all intended that Berit and her husband Mads should buy a summer cottage. Mads had expressed a desire to have a cabin where he could spend the night, close to his hunting area at Blåbjerg plantation. So, one cold December morning, when Mads was hunting, Berit sat with her coffee in a small, rented cottage and looked at a map. There she discovered that the small West Jutland village of Houstrup bordered Mads' hunting area, and there were actually 3 cottages for sale. 2 days later S.K.O.V.H.U.S.E.T. was in their possession – and an interior design dream could begin.

The cottage, which was previously owned by an elderly couple, needed a loving hand. It was clear to see that over the past 25 years the previous owners had made repairs here and there, built extra rooms for children and grandchildren, and used the materials they had on hand. The walls were also painted with strong colors like pink and green, not exactly something that suited Berit's style. However, Berit could easily imagine what the house could develop into. 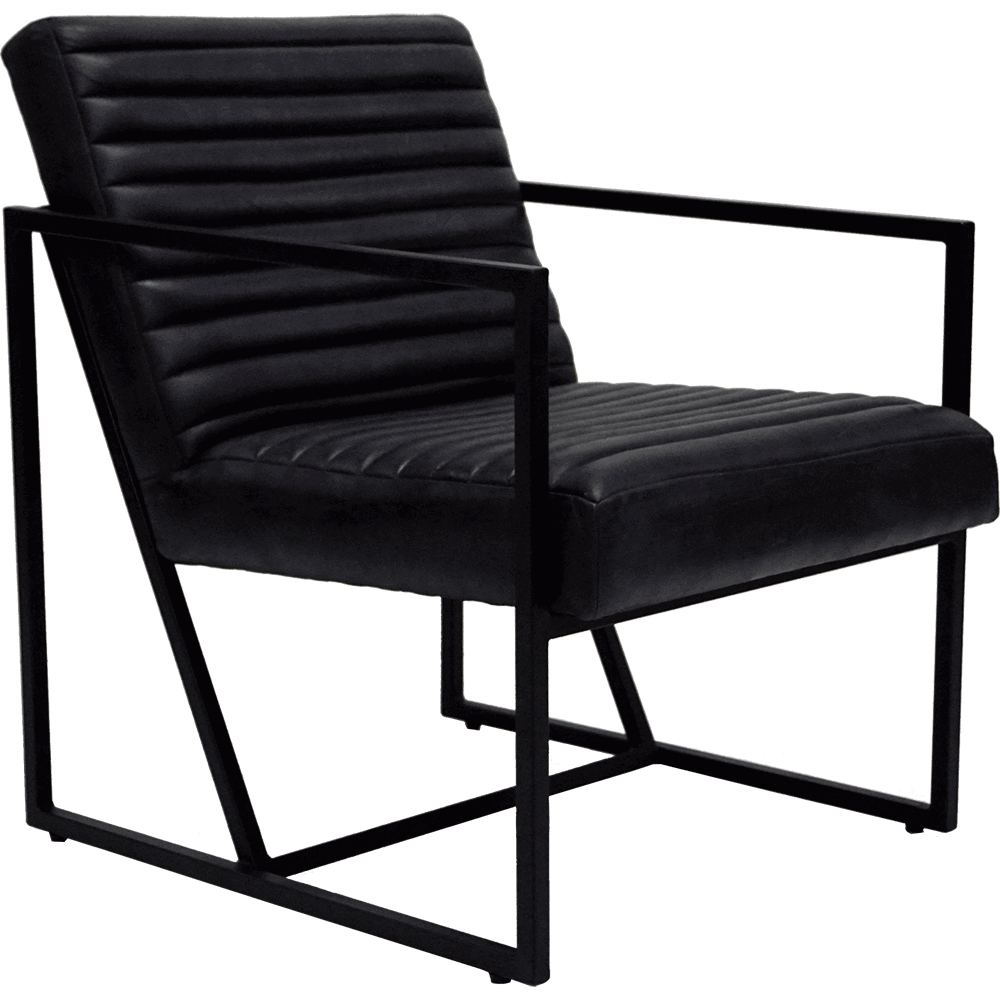 A Scandinavian and natural colour scale

On the ground floor, the walls, ceilings, and floors have been painted, and in fact the hallway is the only place where a slightly larger project has been carried out. New tiles were laid, and the plaster removed from the walls so that the bricks can be seen to their best advantage again.

Berit has a Scandinavian and natural style with a toned-down colour scale, in which black and white are the predominant choices. Or as she herself says, "We play with light and darkness". A kitchen family room was created, where the living and dining area is painted completely white, i.e., floors, walls, and ceilings. On the other hand, the entire kitchen at the opposite end is painted completely black. Here, all the cupboards, walls and window frames are painted black. Even the fridge was given a coat of black chalkboard paint.

The rooms on the ground floor are primarily guest rooms, and Berit wanted to create a "hug feeling" for overnight guests. The inspiration came from Berit's hotel stay in Sweden. She experienced how the Swedes manage to create a cave atmosphere by going all-in on tone in tone in the hotel rooms. Berit used the same method in the ground floor rooms, which were painted completely dark on the walls, floors, cupboard doors, doors, and ceilings.

From gray hair to white walls on the first floor

On the first floor, on the other hand, several walls were removed to create a large, beautiful living room. However, Berit struggled with an unmanageable coconut carpet that was glued to chipboard. An unexpected problem also arose when the partition walls had first been removed, as there were level and material differences in the old rooms.

Instead of the old creaky floor, Berit and Mads laid a new wooden floor, which has been painted white. Berit solved the problem with the transition between the rooms by putting up old beams where the old partition walls were, and now nobody notices that there is a little difference here and there.

Crazy about the universe of Trademark Living

At the risk of sounding smug, we dare say that Berit loves Trademark Living's universe. In any case, she herself claims that the first time she saw our stand at Formland she thought "WOW" and continues, "It was almost the only stand at the whole fair that I thought was fantastic. When we then had to furnish the summer house, we picked out quite a few things. It is almost these things that today make up the entire S.K.O.V.H.U.S.E.T. In addition, I must admit that it is also Trademark Living's things that give me many nice comments, and I have referred many people to the dealer list".

Berit decorates with large, effective objects rather than small trinkets. She has created lots of cozy nooks around the cottage, all of which contain a large piece of furniture or an "effect". In the entrance hall, she has e.g., used the Sean bench in leather to give a raw, cool vibe. In the living room, the beautiful large wooden tray next to the daybed creates the wow effect that Berit always tries to incorporate in her styling. "It's not always a piece of furniture that gives the wow effect. Just as often it's the next biggest item, but it's important to me that there's a raw, bold article everywhere I look, and it's often from Trademark Living. It's so impressive," says Berit and continues, "I've just seen your Christmas decorations. Iron and leather in a beautiful combination, I will definitely use that in my styling for Christmas.”

COFFEE TABLES IN
IRON AND WOOD >>

Kan du lide Berits stil kan du følge hende på @dit.boligmagasin. On the Instagram profile @S.K.O.V.H.U.S.E.T. you can find many more pictures from the summer cottage. Berit doesn't post more pictures, but the profile is definitely worth a visit.

Achieve a Scandinavian and rustic look – decorate with wood, leather, and iron

Decorate your home or cottage with a bench when you need seating where space is limited. 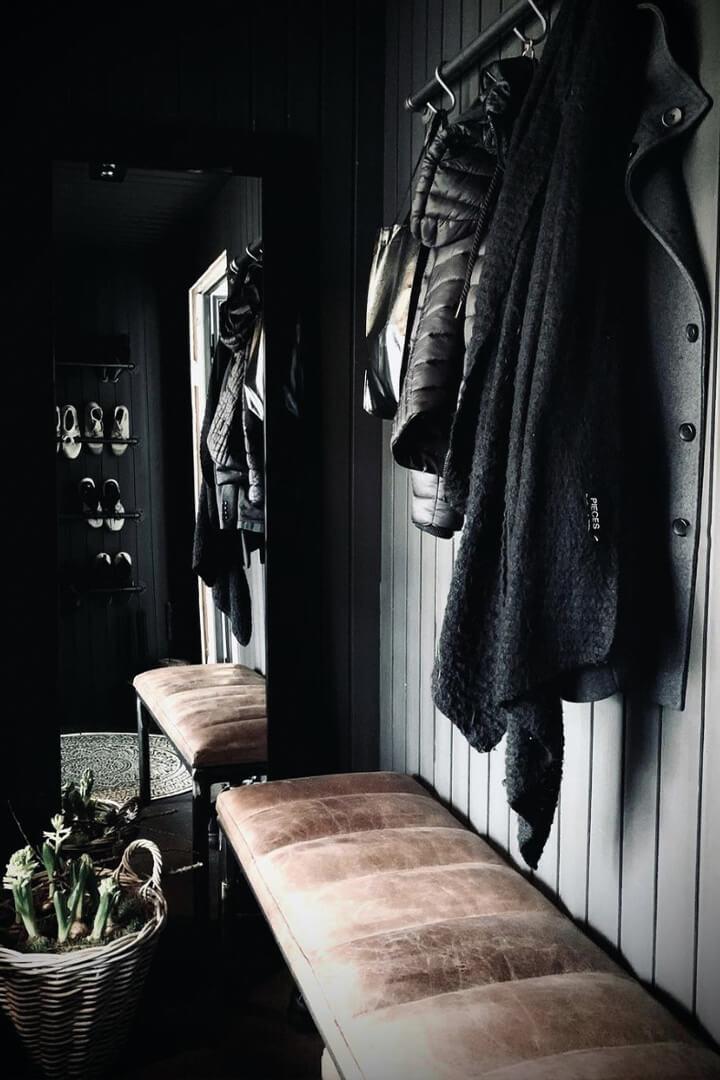 Use a tray as a base for a beautiful still life. Feel free to place it on the floor to give a wow effect. 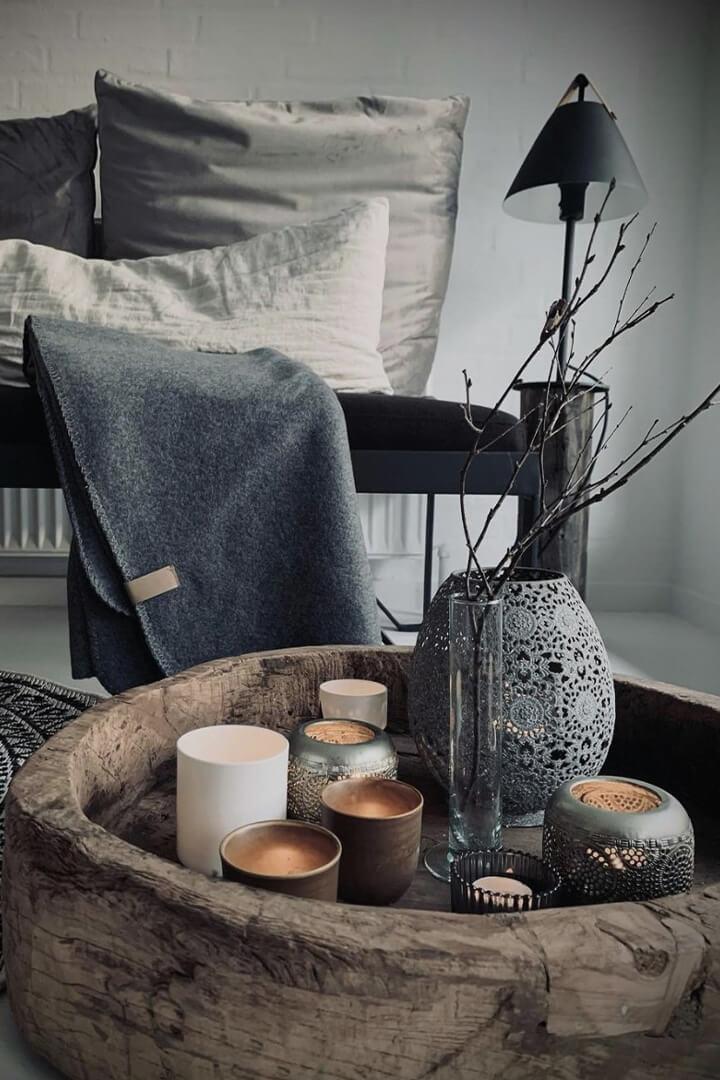 Let a small coffee table or side table play a central role in your interior design and decorate a cozy corner. Then you always have a place for books, your coffee, or a bowl of goodies. 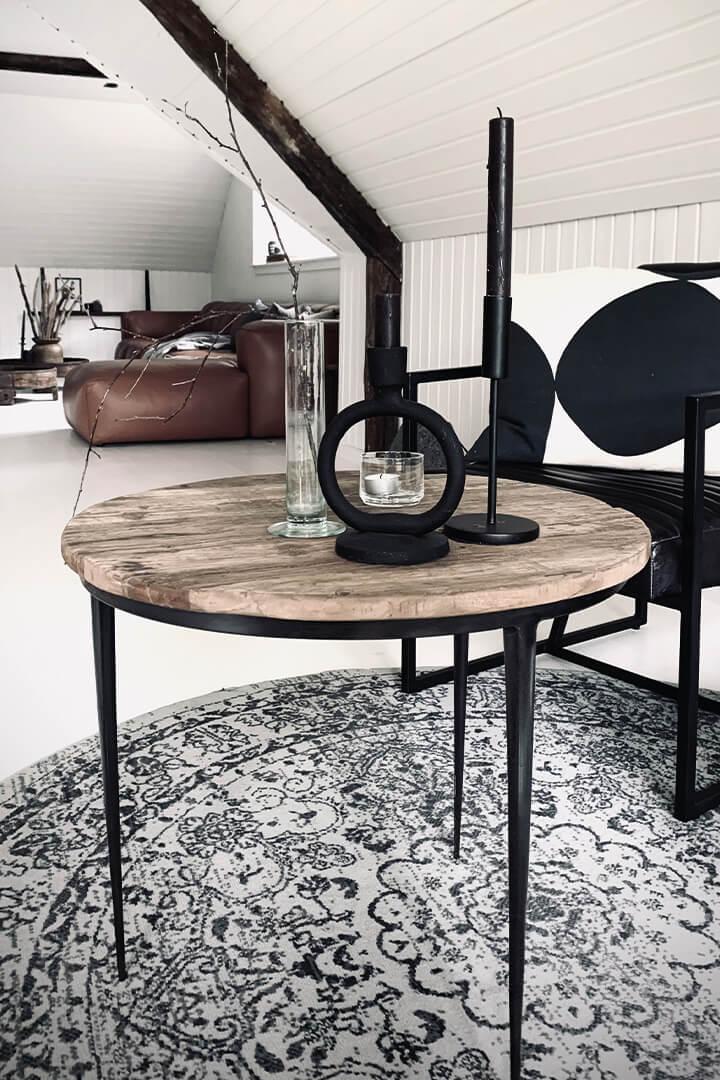 Choose a leather dining chair when you are looking for a chair with extra comfort. In addition to comfort, you also get an exclusive element added to your décor. 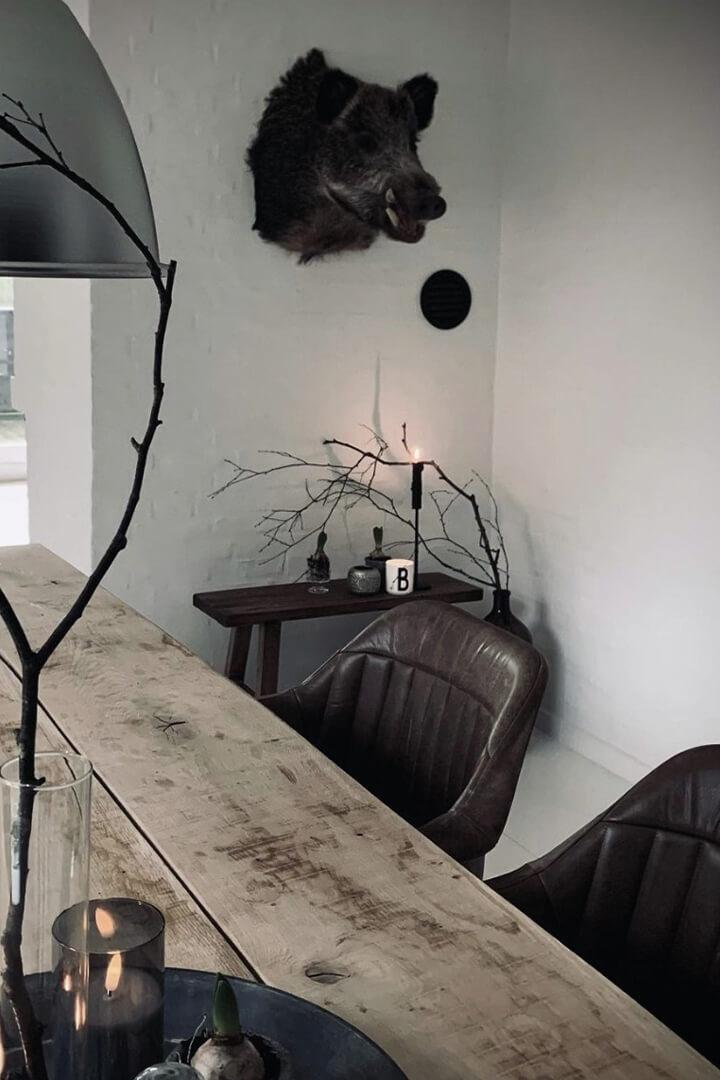 Wooden cutting boards are not only suitable for cutting. As an extra nice touch, use them for serving as well. 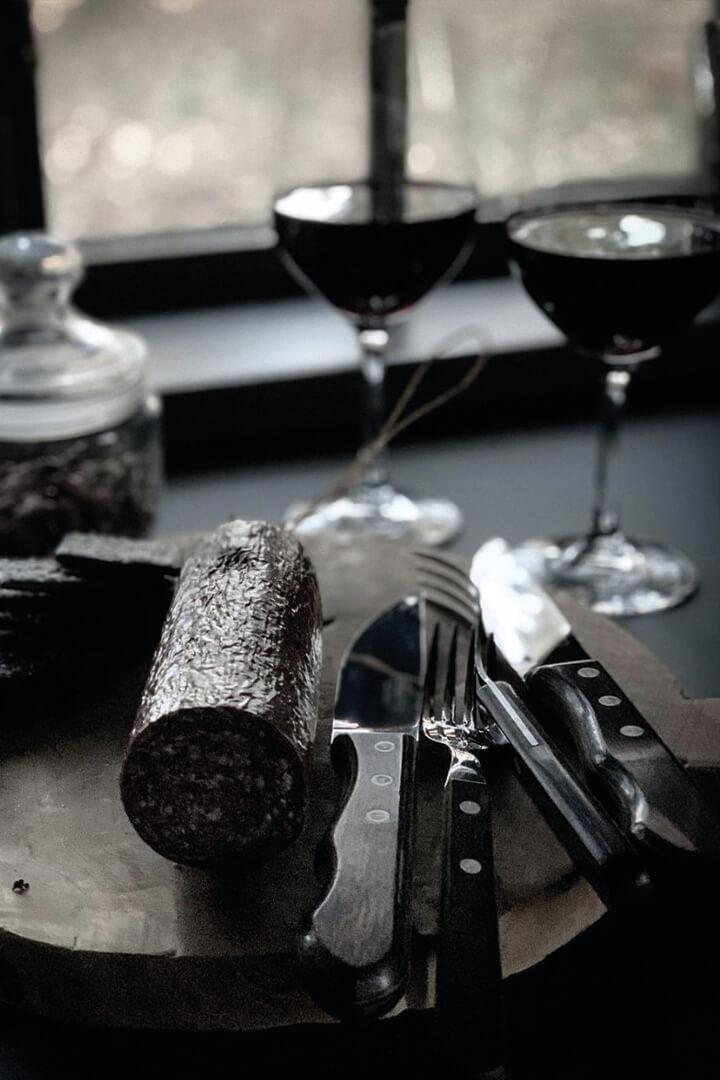 Create small nooks in your interior where you can sit and relax with your favorite magazine. Choose a lounge chair with a good comfort. 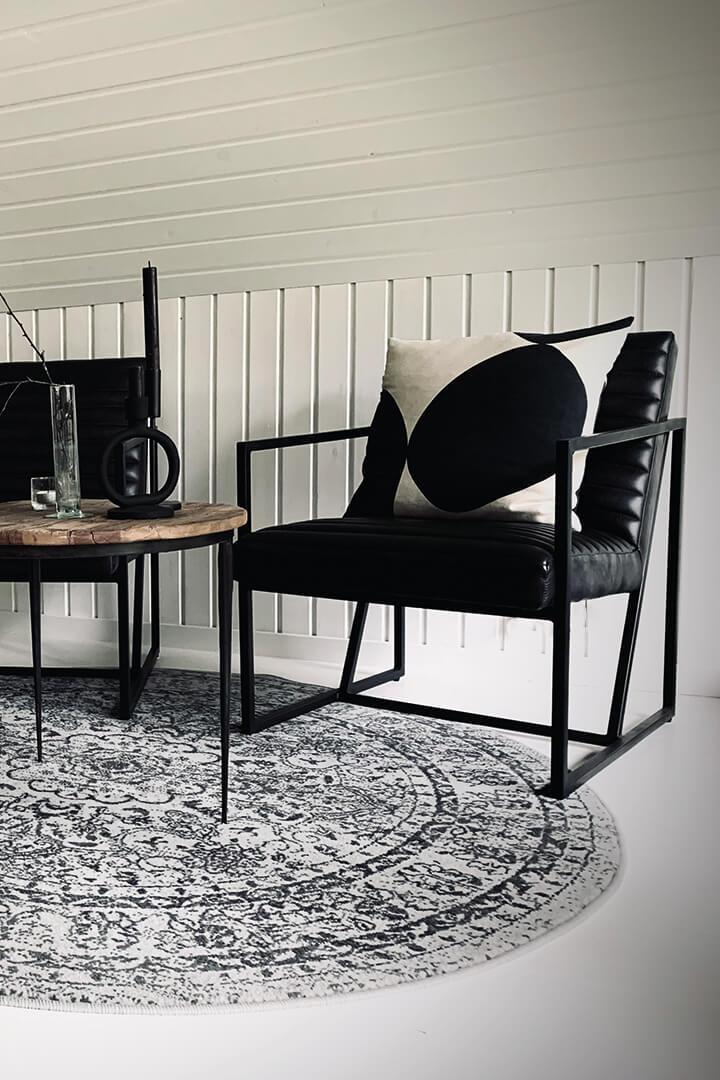 check_circle Added to your cart

Keep shopping Go to basket
Back